Home Images of Burton and the Mails

Images of Burton and the Mails

In 1877 the office was moved to a new building on the site of Parker’s Almshouses on the east side of High Street which was later to become the Constitutional Club.

In 1905, it moved again to new premises in New Street. These were built by R.Kershaw Limited which, just two years earlier, had built the Fire Station across the road. At the time, there were 12 sub-post offices in Burton. 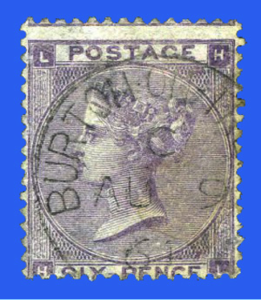 The above stamp, with a Burton postmark dated 9th August 1861, is a Six Penny ‘Lilac’. For half a shilling, this would almost certainly be for a package rather than a letter.

By 1912, there were 19 sub-post offices distributed around the town but also, a combination of 38 wall and pillar boxes strategically distributed around the town. A few original ones survive characterised by having the Edward VII insignia on the front. Though most of the original sites are still in use, most boxes have been replaced. It was not uncommon for someone to call for the doctor by sending a postcard! Before you scoff however, there were eight collections every day except Sunday, when there were only two. Letters posted in the morning would often reach their local destination before lunchtime and very often, replies were received on the same day. No local post would of course, ever leave Burton unlike today’s logistics.