Home History of the Mails in Burton

History of the Mails in Burton

The first recorded Burton postmark was 8th October 1722. It arrived at its destination in London two days later. The postage cost, based on mileage, was sixpence (6d), which the recipient had to pay on delivery.

The postmark appeared as BURTON REF 1, which continued to be used until 1768.

Up until 1765, Burton mail from London only travelled as far as Lichfield where it had to be sorted.

In 1765, a number of Staffordshire Members of Parliament, including the MP for Burton, presented a petition to the General Post Office in London complaining both about the service and the high charges added by Burton postmaster, William Stratham. The London to Lichfield postal charge was 4d, but Mr Stratham applied a 2d charge from Lichfield to Burton, which was thought of as very unreasonable. It was customary at the time to reply the same day and a further 1d was charged for the return journey. This meant that the people from Burton were paying 3d more for the same service available in Lichfield or Derby. In 1765 therefore, the Post Office conceded and introduced a new-sorted bag for Burton, avoiding the excess charge. The new bag however, still had to be collected and returned to Lichfield although postmaster Stratham was allowed an extra £60 a year to provide a man and two horses for both Lichfield and Derby.

Horse delivery continued until the Mail Coach System was introduced in 1796 when Burton at last enjoyed its own direct mail service. The route ran through Lichfield-Burton-Derby-Nottingham-Newark; Newark provided the link to the Great North Road, which ran up to Edinburgh. The coaches ran to a tight schedule and postmasters at each office signed for each collection and despatch, recording the time.

The earliest recorded local collection service within Burton was 1816. It did not however, prove to be viable and was fairly short-lived.

The post office in 1818 was at the George Inn in High Street. In 1834 it moved to the Three Queens Inn in Bridge Street but was moved back to High Street in 1841. It still stood next to the George in the later 1850s. 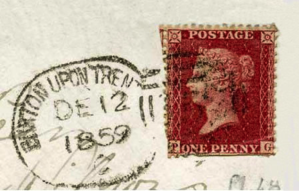 Above shows an 1859 Burton upon Trent postmark and a One Penny Red stamp of the time. With several collections a day, this was probably being sent to someone else within the town to be read later the same day.