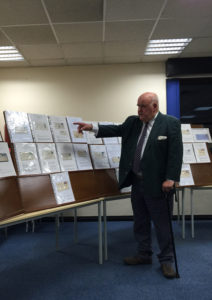 On a rather warm evening we enjoyed a very special evening of ‘Cape of Good Hope’ presented by fellow member Mr Robert Johnson RDP.

The Portuguese were the first Europeans to reach the Cape of Good Hope in 1488, led by the explorer Bartolomeu Dias.

Later and now under British influence, stamps were first issued in the colony on 1 September 1853. The two stamps that were issued were a one penny in brick-red and a four pence in blue. They were printed by Messrs Perkins, Bacon & Co in London. The original die for these stamps was cut by William Humphrys, an engraver employed by Perkins Bacon. Sheets of a special handmade paper, measuring 282 mm by 536 mm, were used to print 240 stamps per sheet. The stamps were issued imperforate. The rate of postage within the colony at the time was 4d for a half ounce letter and 1d for a newspaper.

In 1864, the new ‘Hope’ issue replaced the triangular issues. 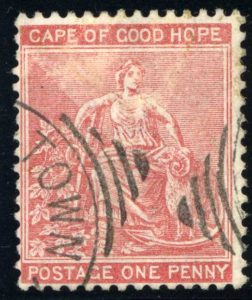 This showed the allegorical figure of Hope seated with a ram and vines. Until 1883, this was the only design except for the triangulars.

For early September, it proved to be an unusually warm evening and the windows were open to allow a breeze in the room. However, the lights attracted nearly every flying bug in the area to descend on the lighting! Whilst it became a bit of a challenge towards the end of the evening it did in a small way re-create the atmosphere of what it may have been like for all the early settlers in the swampy land of the Cape way back in 15 Century! 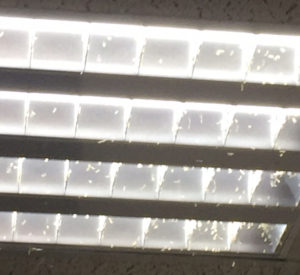