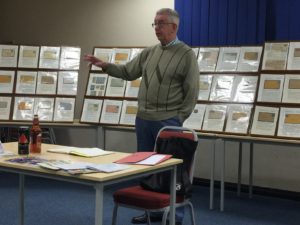 This society meeting arguably was perhaps one of the most exciting and indeed interesting that the membership can recall for many many years if not since the society was founded! John Walker treated us to a truely remarkable display of  unique material and shared with us his enthusiasm of his 40 year collecting interest.

His Confederate states material has just returned from being displayed at the World Stamp Show in New York where it received a large Gold Medal! John also received many well deserved accolades.

The postage stamps and postal system of the Confederate States of America carried the mail of the Confederacy for a brief period in American history. Early in 1861 when South Carolina no longer considered itself part of the Union and demanded that the U.S. Army abandon Fort Sumter, plans for a Confederate postal system were already underway. Indeed, the Confederate Post office was established on February 21, 1861; though it was not until April 12 that the American Civil War officially began, when the Confederate Army fired upon US soldiers who had refused to abandon the fort. However, the United States Post Office Department continued to handle the mail of the seceded states as usual during the first weeks of the war. It was not until June 1 that the Confederate Post office took over collection and delivery, which meant that they were now faced with the task of providing postage stamps and mail services for its citizens.

John Showed us numerous examples of Postmaster’s provisionals some examples of which were the only known example. There were covers from ‘blockade runners’, patriotic covers and other items too numerous to list in detail. Our only disappointment was the fact there was so little time to study this wonderful display and indeed we are inviting him back so we can see it again. 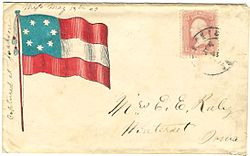